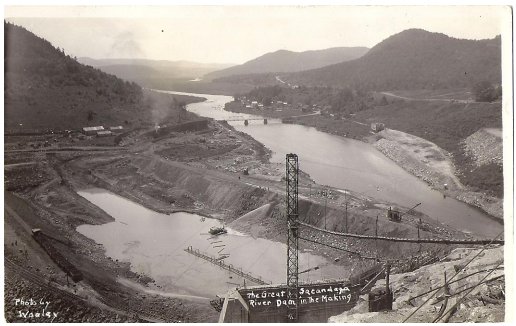 Ninety years ago today life in the Sacandaga Valley changed forever. March 27, 1930 marked the completion of the Conklingville Dam and the closing of its three large Dow valves, which hold back the 37 billion cubic feet of water we now know as the Great Sacandaga Lake. While the day was marked with a small gathering, there was no elaborate ceremony. As all upstate New Yorkers know too well, the weather in March can be problematic for outdoor gatherings. The pomp and circumstance of long speeches from honorary guests eventually occurred in September of that year, when the weather was much more pleasant.

The massive project to build the Sacandaga Reservoir actually began three years prior to this date. Despite local opposition, New York State created the Hudson River Regulating District, giving the new agency the authority to create reservoirs within the Upper Hudson River Watershed in order to impound water, preventing flooding. In addition, water could be released in times of drought. The Sacandaga Reservoir Project would create the largest reservoir in New York State.

Ten communities in the valley were either partially or completely flooded. All residents living below “the taking line” needed to move to higher ground. All of the buildings and structures had to be removed, ten new bridges built, miles of new highway constructed. Two additional dams besides Conklingville had to be completed. This massive undertaking cost 12 million dollars, 95% of which was paid for by private companies along the Hudson who would benefit from a guaranteed water supply. The other 5% was paid for by communities that would benefit from flood control.

Looking back with our 2020 vision (pun intended) we now know that the Great Sacandaga Lake (whose name was changed in the 1960s to increase tourism) holds the key to the local economy. Waterfront restaurants, shops, marinas and rental properties all benefit from the influx of tourists during the summer who are drawn here by the majestic beauty of the lake. However, at the time of the construction it was unclear how the valley would reinvent itself. When the Conklingville Dam was completed the country was in the throes of The Great Depression, World War II was not far off and America’s future was uncertain. The post-war economy of the 1950s brought the huge lakeside cottage boom around the Sacandaga, one that continued for decades and is still active today.

We are all feeling a bit stir crazy these days amid the restrictions aimed at preventing the spread of COVID-19. May I suggest taking a ride around the Great Sacandaga Lake? When you get to the Conklingville Dam and drive over the top, take a moment to think about the former residents of this valley who had to give up their homes and livelihoods in order for the reservoir to be built. Think about the workers whose job it was to clear the immense valley and build the dam itself. Take in the beauty of the surrounding landscape. I promise, you won’t regret it (even in March). Interested in learning more? Check out the 2017 documentary Harnessing Nature: Building the Great Sacandaga, funded by the Great Sacandaga Lake Advisory Council and available at www.greatsacandagalake.com, at local libraries and at businesses throughout the Sacandaga Valley.

The very first meeting of the Board of Supervisors was held on the last Tuesday of May at Mead’s Tavern in Stillwater. Being that only three of the four supervisors were present, they decided to adjourn the meeting until the next morning. The next day the board met at 10am, but upon noting that Beriah Palmer was still absent, they adjourned again. Finally on June 2, two days late, Beriah Palmer of Ballstown arrived in Stillwater to attend the meeting. It was decided that Palmer, despite his lack of punctuality, would be moderator of the board. The next order of business was appointing a clerk, Cornelius Vandenbergh, and a treasurer, Guest Van Schoonhoven, to the board. After these appointments were made, the rest of the business consisted of paying accounts and levying taxes. The record shows the county was paying for services such as taking the census, working at elections, laying out roads, making tax lists, killing wolves (by offering a bounty for wolves, the county hoped to get the wolf population under control), overseeing the poor, attending trials, surveyors work and constables. After the accounts were settled, the board agreed that they would adjourn and plan to meet again on the first Tuesday in September back at Mead’s Tavern in Stillwater.

Over the course of 220 years, many things have changed in county government. The Saratoga County Board of Supervisors meets once a month rather than only twice a year. The board consists of 23 supervisors, a far cry from the 4 present at the first meeting. The board meets in a modern legislative chamber within a structure built expressly for the purpose of governing the county, a vastly different atmosphere from Mead’s Tavern. Meetings take place in the county seat of Ballston Spa, not Stillwater. While at times it may seem that modern board meetings are a bit lengthy, they certainly do not compare to the three-day long meeting experienced in 1791.

In the year 1991, on the county’s 200th birthday, the Saratoga County Bicentennial Commission planned events throughout the year to commemorate the anniversary. Some people may remember the event at Canfield Casino where supervisors reenacted the first board meeting and an 18th century fashion show was held. There was an essay contest for local students, a bicentennial calendar, a Heritage Day held at SPAC, a parade, and finally, the Bicentennial Gala Ball held at the Saratoga Springs City Center. These events brought pride to the citizens of Saratoga County and highlighted how far we had come in the last 200 years. Now, 20 years later, the county is still making progress in its reputation as a wonderful place to live, work and vacation. Happy Birthday to you Saratoga County, and may the next 220 years be as memorable as the first!

Please Note: Click on the links below to see the actual minutes of the first Saratoga County Board of Supervisors meeting. They are viewable in both typescript and original handwritten form.